Immature Spouses – Not Ready to Be Adult Spouse and Parent

Your description of your husband fits someone who is immature. He is not prepared to take on the caring and responsibility of being an adult spouse and parent. From what you have described, he is probably good at dating and early-stage relationships, but he does not know how to stay in love for the long-haul. … Read more

Read Immature Spouses – Not Ready to Be Adult Spouse and Parent

Many people look to divorce as a way out of their present unhappy situations. They think that if they can only get out on their own they will find happiness and fulfillment. What does the research show? Does Divorce Actually Make People Happier? A team of well-respected marriage therapists and researchers authored a 2002 report … Read more

Arguing is almost always going to happen eventually in married couples and long-term relationships. Arguing often leads to anger. Learning how to change your attitude can help you reduce angry feelings. The best case is for arguments to be more like a debate or a discussion, where all stances on the issue are seen … Read more

Spouses in an arguing couple often make the situation worse. Couples Argue Arguing couples usually feel they are stuck in a rut and fighting much of the time. If you are part of an arguing couple, whether married or in a long-term relationship, you can probably learn to change this angry, corrosive behavior and make … Read more 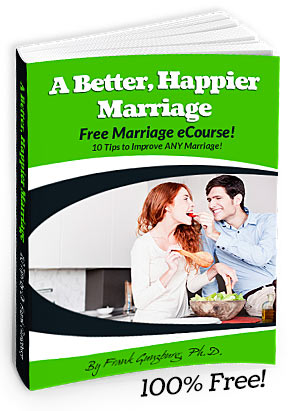